Project: I helped out Ben Adams from lost coast woodworking with generating files for some sculptures of Sverre Bjertnes. The artist provided a small-scale clay model which got scanned and then smoothened out before positioning alignment holes and cavities for reinforcement. Then I created a few python scripts and used some of my personal automation tools to split the model up into layers and generate the cutting files and assembly guidelines automatically. In total there were 225 layers split into 783 pieces spaced over 11 sheets of plywood. Some of the remaining cut sheets were repurposed into room dividers. I generated the files, all cnc-production and assembling was done by Ben Adams.

I haven’t been updating this blog for a long time now (almost two years – crazy how the time flies). It’s be

I created a tool for making minimalist jewelry in any chosen size. After playing a bit around with it I started automating the generating of rings in common used sizes and exporting to Stl-files for production. Quite impressed by the quality of 3D-printing some of these, fun stuff! Look below the gif for pictures and examples of 3D-models. Contact me for enquiries. 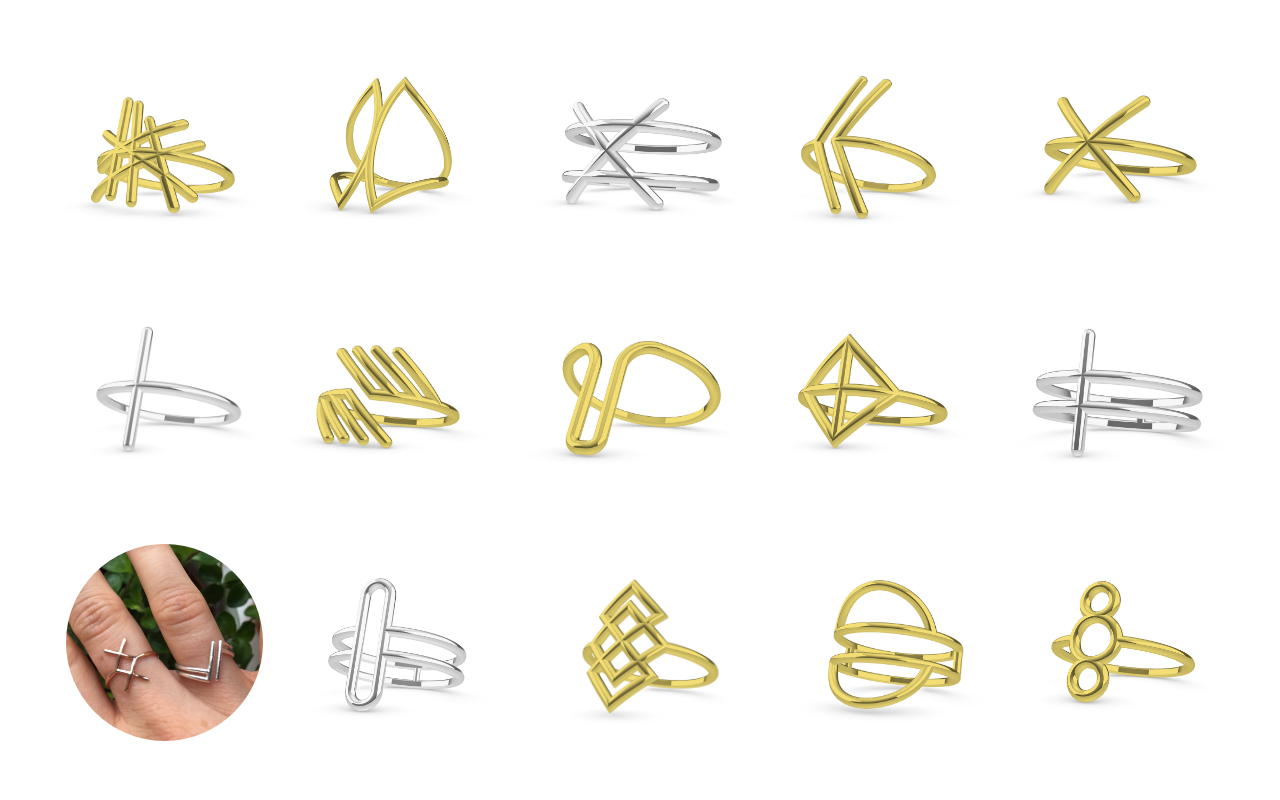 Project: I’ve been helping out Ben Adams with producing parts of the interior of the new Toyen library for kids in Oslo. I’ve been drawing the constructions to be made on the CNC so I gave advice on fabrication while drawing everything out. Ben then assembled all parts at the library which later got finished with upholstery and paint.

This project was created for Artisan Tech AS, in collaboration with Rodeo Architects.

Project: Biolinia had a quite cool idea with one of the viaducts in Detroit, where they wanted to fill up the walls with reflectors. 10 000 of them. But before putting them in place on location, they wanted to be able to decide on the pattern of the reflectors.

Project: This project is the next step of this and this post on Jens Dyvik’s blog.  I’ve been producing the remaining mountain chairs for the dining place of Haakon’s Fablab. I used the grasshopper definition from Jens to create the curves for generating the toolpaths.

Then it was interesting to turn all the 30 puzzle pieces into one sturdy pine chair. In the front is a metal rod to reinforce the chair.

All the chairs around the table create a cozy and enclosed atmosphere. A bit like a room in a room. Together with the table I’m producing they’ll form a great dining experience for the people staying at the fablab.

It’s been a while since my last update but a lot of things have happened over the past half year. I’ve moved to Os

Project: I came across this image* on the internet and wanted to try and automate it in Grasshopper so I could use any image to generate these kind of lines. Turned out it was easier then I expected. I milled a “hello world” image out and I’m really satisfied with the result.

*Edit: I finally found out who made this great illustration. It’s apparently made by Notter & Vigne.

Project: With a CNC-machine it is possible to control the depth of your tool, so using a V shaped bit creates different thicknesses of lines, similar to pushing harder or softer on a pen or brush. By working with CNC-machines and writing its g code (which controls the machine) I got interested in making a font which can be milled in 3D on the CNC mill using a v-bit.

Of course there are ways to work around this process and use any font to engrave the full curves. But machining in one go makes it more efficient and provides a start for research on the combination between typography and the machines that make them physical.

I tried a quick comparison between using the v-carve software for engraving and making my own g-code, using the font “Milasian Circa Font” of which the geometry seems suited for the project (Personal use only license). Turns out v-carve is quite efficient in its tool-path generating, but the smallest flaw in the geometry of the letters causes it to make unnecessary extra movements. To give you an idea: direct gcode milling got a result of 45seconds, whereas vcarve’s g-code took 1min15s. Big difference that is.

The whole project is also an interesting exercise in trying to turn the geometry into a grasshopper definition for making gcode with the v-bit tool as a parameter.

While googling for something else, I accidentally stumbled upon this image which helped me out in my search. Apparently what I was looking for is the medial axis of a 2d shape so I looked around for other people’s research on that in grasshopper. After seeing an old post from Daniel Piker I came across a page with some explanation on how to do it by Generative Landscapes. After using his definition to make the medial axis I reverse engineered it so I could generate shapes from the medial axis by controlling the width of the shape at different stages. This could be a good base to start for making a typography font to use.

Also, it looks like the same definition can be useful to control stroke width, similar to what you use in Illustrator. Difference is that you can have live control over different aspects of the stroke, which can be quit handy.